Thanks to the Kirky Herald for publishing a short feature on my ride. 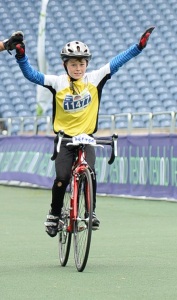 It was only thanks to the expert care of doctors at Yorkhill Hospital that the  little boy pulled through.

Now fighting fit, he has set his sights on cycling from John O’Groats to Lands End during the school holiday week in October to raise cash for Yorkhill Children’s Charity.

Patrick told the Herald “After the shock of going into hospital, I just wanted to have fun on my bike again.”

Last year, the youngster was one of 800 people who took part in the Pedal for Scotland Sportive event, a 110-mile cycle challenge taking in Edinburgh and Glasgow, inspired by Olympian Sir Chris Hoy.

Now Patrick plans to step up the pace and take on the 600-mile trek to Land’s End.

A keen cyclist since the age of five, Patrick said: “Last year’s Sportive was a huge achievement but I felt I could do even more and this time raise money for Yorkhill Children’s Charity.”

When he was just five years of age, Patrick did the 50-mile Cycling Scotland Pedal challenge ride from Glasgow to Edinburgh.

Each year his school also takes part in Sustrans Big Pedal, where the children log their journeys to school over 10 days against a virtual Tour of Britain.

Patrick said he decided he would like to try it for real, see some sights and have his own Tour of Britain.

His dad Mark will be following him all the way on his big challenge.

Mark said: “Without the expert care and dedication of the staff at Yorkhill, Patrick would not be with us today.